Artificial Memory Trace aka Slavek Kwi and PBK aka Phillip B. Klingler have been pillars of the global DIY experimental music culture for decades. Both of them have released work on attenuation circuit before. Here, they team up with label owner EMERGE aka Sascha Stadlmeier and his colleague Gerald Fiebig. Each one of the four artists contributes one track of about 10 minutes to the album. But while the four-way split LP is a common format in the global sound culture scene, “fiction circuit” is more than just a compilation.

All of the artists on this album share a love of creating electroacoustic music from field recordings or found sounds. Therefore, label manager Stadlmeier invited Artificial Memory Trace (AMT) and PBK to supply source sounds from their archives. These were then used as the basis for the compositions. Leaving the source material identifiable was not the task – it was to be used as raw material to be sculpted, very much in the spirit of acousmatic musique concrète. On the AMT side, we find the tracks by PBK and Gerald Fiebig. They both used AMT's source material to create their tracks. PBK delivers a dense, rather rhythmic track with a decidedly “industrial” feel. Fiebig's track, on the contrary, uses the front cover artwork – a digital collage by EMERGE of visual works by Kwi and Klingler, with other works by them reproduced on the lavishly printed LP insert – as a graphic score for realising a rather harmonic ambient piece. On the PBK side, Artificial Memory Trace and EMERGE “play” the source sounds supplied by PBK. The piece by Artificial Memory Trace qualifies as exuberant rhythm noise, while EMERGE goes all the way into rather meditative laminar lower-case drone minimalism. Therefore, regardless of which side of the record one plays first (“AMT” and “PBK” are engraved on the vinyl itself to guide the listener), one will experience, thoroughout the whole album, a change between very different sonic textures and temperaments that showcase the wide range of expressive possibilities of electroacoustic music. This is not the product of good luck, but of planned collective composition: AMT and PBK, as the “guests” on the label, were invited to create whatever they liked without any formal restrictions. As it turned out, both of their works were rather intense and direct in character. Therefore, EMERGE and Fiebig both made an effort to complement each side with a more subdued, quiet piece.


untitled collage by Phillip B. Klingler

This is a review of a 4 way split album between Ireland's Artificial Memory Trace, Germany's Gerald Fiebeg, Emerge and U.S.A's PBK called "Fiction Circuit and we will start off the review with PBK trace a solo artist that plays a mixture of ambient, noise and drone

His side of the split starts out with some harsh noise while his track is over 9 minutes in length while atmospheric sounding drones can also be heard in some parts of the song. Elements of ambient are also added into the music which also makes the track more diverse as well as keeping everything instrumental and field recordings are also utilized at times.

Next up is Gerald Fiebeg a solo artist that plays a mixture of experimental, drone and field recordings.

His side of the split starts out with some atmospheric sounding drones along with his track also being over the 9 minute limit. At times the music also gets very experimental and avant garde sounding and all of the music sticks to an instrumental direction as well as getting very diverse at times.

Next up is Artificial Memory Trace a solo artist that plays a mixture of experimental and ambient.

His side of the split starts out with a very ambient and drone orientated style while also getting very experimental and avant garde at times. The tracks is also over the 9 minute limit along with some touches of noise also being utilized at times as well as keeping everything in an experimental direction.

Closing the split is Emerge a solo project that plays a mixture of minimalism, experimental, ambient and noise.

His side of the split starts out with an almost silent sound before going into more of an ambient musical direction. His tracks is also over the 9 minute limit along with the music also having its experimental and avant garde moments and as the song progresses a small amount of noise elements can also be heard.

In conclusion I feel this is a very great sounding split and would recommend it to all fans of noise, experimental, ambient and drone. 8 out of 10.

Sascha Stadlmeier’s Attenuation Circuit imprint has for a number of years now dedicated itself to apparently documenting all kinds of unknown artists operating in the worlds of abstract electronics, ‘noise’, electroacoustic and location recording-based sounds on such a regular basis I can’t imagine who can keep up with everything. Mostly releasing low-run CDRs or, these days, digital works, the label sometimes strays beyond and puts out a ‘real’ CD or even vinyl album. To my knowledge, the latest of the latter, however, Fiction Circuit, has been the first such release for a considerable while. Limited to 300 and pressed on marbled dark green vinyl, it collects a piece each by names slightly better established amongst the basement lab hordes, PBK, Gerald Fiebig, Artificial Memory Trace and Sascha’s own Emerge. Using AMT source material on the first side and PBK on the second, each artist works their way through a largely atmospheric but sometimes grizzled arrangement of jutting blocks of carefully hewn noise, deep space signals, metallic rasps and swirling static hum. It’s all pretty effective, but as with so much of this type of material all of the pieces slot together like they’re the work of any one of the contributors. There’s nothing inherently wrong with that, of course, and although I’m often sceptical about so many such artists not necessarily bringing anything new to the table, it’s impossible to deny the conviction of those who’ve been doing it for so long, against all the odds, such as the four of them here. In fact, it’s precisely because they’ve each been at this for so long now that all of the pieces sound considered and are possessed of the kind of depth so many others of a similar disposition aspire to. I’ve personally long liked Philip B. Klinger’s work anyway, so it’s nice to have the chance once again to hear what he’s doing. Beyond that, Fiction Circuit might well be one of the best releases of its kind for quite a while. If you’re going to dip your toes just once into these waters, whether for the first time in a while or for the first time ever, this LP is a grand way to do it. (RJ)

What a joy to get the veterans of hometaping underground like Slavek Kvi and Phillip B. Klingler to work with Sascha and Gerald.
4 way split seems like a natural way of putting things together when you have artists working on the verge of post-industrial electroacoustic genre soaked in field recordings, found sounds plunderphony, electronic noisy manipulations.
A planned collective composition at its best with a sure hand of all four artists working together.
AMT played by PBK is a rough noise collage of sharp edges and an old school feel of acousmatic porous surface but done with light weight approach and genuine approach to the crude sound matter.
AMT played by Gerald Fiebig is different in tone - has a minimalistic ambient feel to it but again with hisses and splurge of little details circling around. A more of a meditation on sound in the tradition of minimal music.
PBK played by Artificial Memory Trace is a great surprise. By any means it holds up with the rest of the tracks and falls into electroacoustic genre but there is smething beautifully haunting about it. A quality of a rare occurence - somewhat of a conceptual approach put into the glorious framework of a psychoactive trip into the world of magnified micro-sound.
And finally PBK played by Emerge is a coda to the whole set - starts almost inaudibly but develops into mystery of the drone ambient, without any rush, evolving slowly and leaving the listener with a thirst for more.

Ah, it says here "the four-way split LP is a common format in the global sound culture, "Fiction Circuit" is more than just a compilation"; ah, of course, I muttered. Maybe they are right, I thought upon closer inspection of the information, cover and music. It is, in some way, a classic late '80s product of sound exchange, blurring lines between composers and suppliers of sound material. On one side we find the source material supplied by Artificial Memory Trace in the hands of PBK and Gerald Fiebig, each creating their ten or so minute piece. The same happens on the other side, except the source material is recorded by PBK and now it's time for Artificial Memory Trace and EMERGE to play around with these sounds. Even an old sceptic, when it comes to compilations, like me would agree that is indeed something different. Pieces might actually not be ten minutes, I thought, when I was playing the PBK track, which seemed longer than Fiebig's track. PBK, as we recently (two weeks ago) found out is still a man who loves his industrial roots, with heavy use of effects. To hand him the probably delicate sounds of Artificial Memory Trace is a bold move and he reworks them into quite a beast and feast of sound transformation. Heavy-duty noise, which is also a bold move on his part; it is not the way field recordings are usually treated. Fiebig, on the other hand, keeps matters small and drone-like. He chops the material together and carefully selected a few sounds and pastes these in a wonderfully fine mellow drone. Artificial Memory Trace isn't always very careful with his music, but also with the sounds produced by PBK he knows his way around with the reverb unit, and with a pair of scissors he does a random cut-up, set against fine glacial drones, ultimately going for some stuttering digital effects. EMERGE, together with Fiebig, the men behind the label, may have swung by Fiebig and looked at the notes he made (literally, maybe) and went; ah yes, a drone approach is nice. Then, of course, he is known to play a fine drone himself and that's what he does here. That makes that two times two approaches are similar, which is something of interest and great excitement. This is a great compilation; four bands on LP is the best format for such a thing.
(FdW) 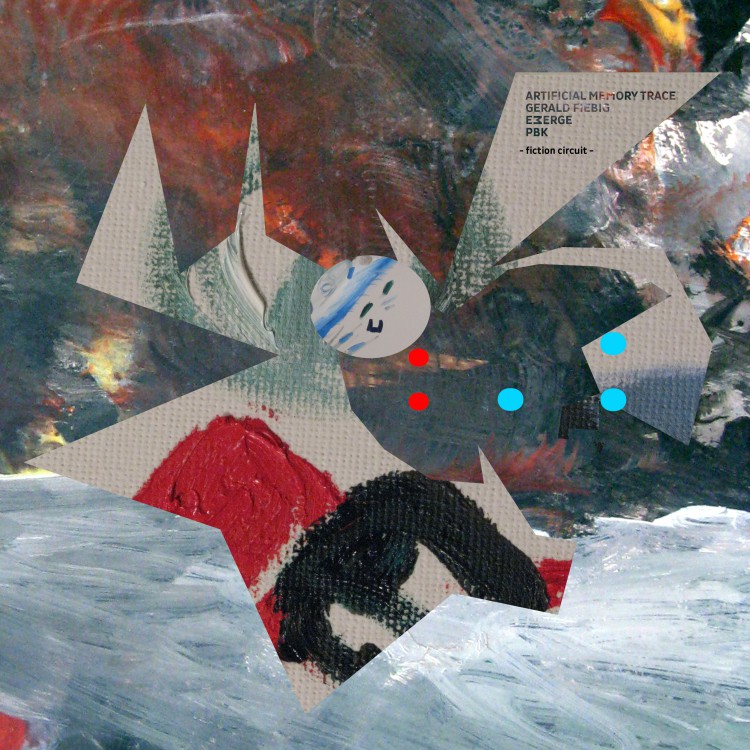 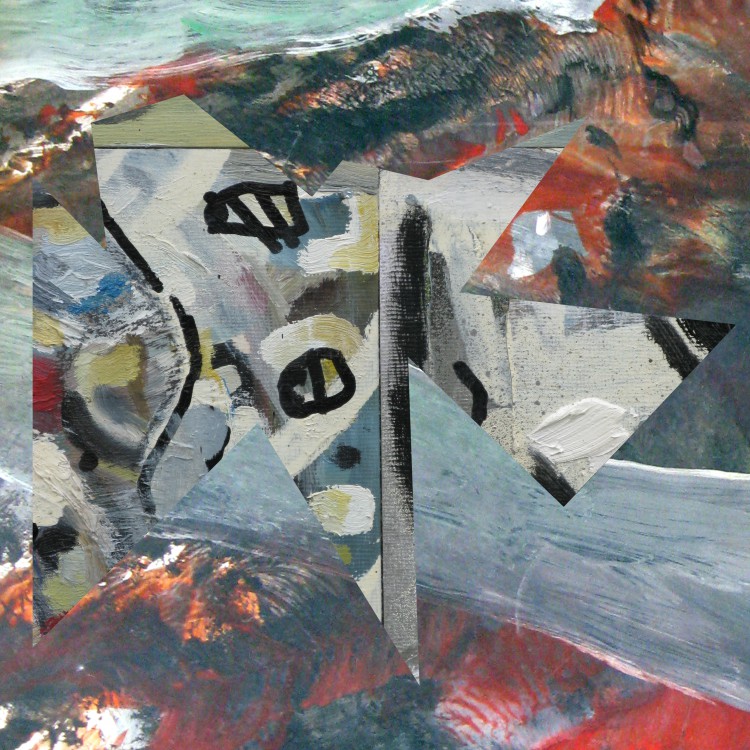 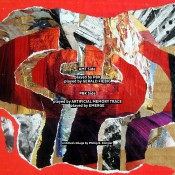 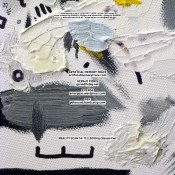